Search the best Lima hotel deals on every device. Download the app for free

VIEW DEAL
Featuring an indoor pool, this Callao hotel is conveniently situated minutes from Jorge Chavez International Airport. It has a spa and wellness centre, as well as 24-hour room service, babysitting/child services and an express check-in and check-out feature.

VIEW DEAL
Located in Lima, Swissotel Lima provides stylish, 5-star accommodation close to Huaca Huallamarca. It has a spa, as well as an outdoor pool, 24-hour room service and a rooftop terrace. 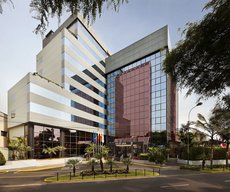 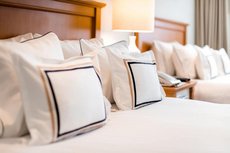 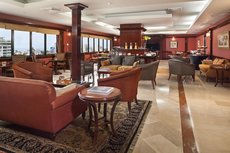 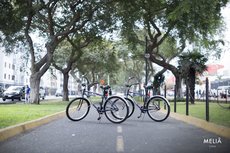 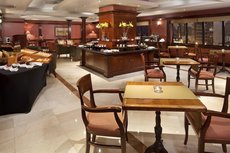 VIEW DEAL
Situated in Callao, Holiday Inn - Lima Airport provides 4-star accommodation, as well as a swimming pool. It also offers a 24-hour reception, a currency exchange and a concierge.

VIEW DEAL
Situated in Lima, Courtyard by Marriott Lima Miraflores offers 4-star accommodation, as well as a swimming pool. It is ideally located for those wanting to visit the area's popular attractions.

Tips when booking a hotel in Lima

About Lima
An energetic blend of colonial architecture and modern development, Lima was once nicknamed the “King of Cities” by Spanish conquerors. This sprawling metropolis boasts some of Peru’s best restaurants, museums and art galleries, along with an alluring strip of sand that borders the South Pacific Ocean.

Plaza de Armas is the historic heart of Lima and a UNESCO World Heritage Site, with most of its buildings dating back to the years following the 1746 earthquake. It’s home to the grandiose Cathedral and the Palacio del Gobierno, built on the spot where Peruvian independence was declared in 1821.

Jiron de la Union leads from Plaza de Armas to Plaza San Martin, where the Baroque facade of the 18th-century La Merced Church can be admired. Plaza San Martin is also home to Casa de Aliaga, one of the best-preserved colonial mansions in South America and beautifully furnished with period pieces from the 16th to 18th centuries.

One of the most fascinating churches in Lima is the Convento de San Francisco, which was used as Lima’s first cemetery and still contains the bones of around 10,000 people in its catacombs. Explore the maze-like passageways, then head upstairs to see the “Last Supper” mural that shows the apostles dining on a Peruvian specialty, guinea pig.

Spend a day in the affluent ocean-side neighbourhood of Miraflores, which lies in the south of the city. Take in the views from Parque del Amor and admire the Peruvian ceramics of Museo Amano, before dining at one of the many contemporary restaurants.

Jorge Chavez International Airport is the main gateway to Lima and situated around 35 minutes’ drive north-west of Miraflores. Buses, trains and mini buses comprise Lima’s public transport system, while taxis are plentiful in most areas.