Search the best Quito hotel deals on every device. Download the app for free

VIEW DEAL
Situated in Quito, Hilton Colon Quito Hotel offers 5-star accommodation, as well as an outdoor pool, a sauna and a Turkish steam bath. It is ideally located for those wishing to visit the area's popular attractions.

VIEW DEAL
NH Collection Quito Royal is a comfortable base while in Quito and is close to everything the area has to offer. Some of the popular facilities on offer at this 5-star hotel include complimentary on-site parking and wireless internet.

VIEW DEAL
Nu House Boutique Hotel Quito is situated in Quito and is close to the area's popular attractions. The multiple facilities this modern hotel has to offer include laundry facilities, a limousine service and a safe. 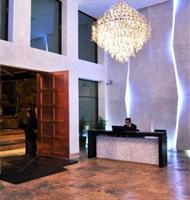 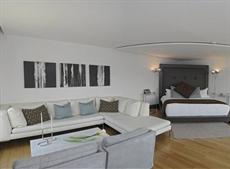 VIEW DEAL
Le Parc Hotel Beyond Stars is located in Quito and is close to Brazilian Embassy in Quito. It provides a spa, as well as a sauna, a rooftop terrace and an express check-in and check-out feature.

VIEW DEAL
Hotel Finlandia is situated in Quito and is close to the area's tourist attractions. The multiple facilities this charming hotel offers include a safe, valet parking and meeting rooms.

Tips when booking a hotel in Quito

About Quito
Quito is the capital city of Ecuador and both the world’s closest capital to the equator and the highest one above sea level, lying at an elevation of 2,850 metres, although its culture and history are much more than its geographical location. With a UNESCO world heritage site as its centre and encompassing natural beauty in the form of the Pichincha Volcano, Andes Mountains and Guayllabamba River, the capital is an enticing centre inspiring more than 2.2 million people to live in it. The laid back culture and warm climate also draw tourists to its streets, which are steeped in energetic entertainment, lively people, music, movement and a sophisticated culture encompassing the best of Ecuadorian heritage.

The main attraction of Quito is its UNESCO World Heritage Site centre, which acts as one of the most significant historical destinations in South America due to its old buildings, monumental architecture and religiously integrated artwork. The area includes important landmarks like Carondelet Palace, the governmental seat of Ecuador, the Basilica del Voto Nacional, one of the largest neo-Gothic buildings in the world, and the city Cathedral, a symbol of local religious history and community. Visitors can also explore areas like La Mariscal, which acts as the entertainment centre of the city and is full of shopping opportunities, gastronomy experiences, culture, music and lights and a lively nightlife of bars and clubs. Quito is home to numerous parks, including the largest urban one in South America, Parque Metropolitano Guanguiltagua, and visitors can also take a 4,000-metre high cable car to the surrounding mountains to fully embrace the nature of the city.

Within the city, visitors can travel using the MetrobusQ transport network, an extensive bus transit system running throughout Quito, or there are bikes to rent and taxis available. A railway also passes through the city or visitors can travel in by car via the two main motorways, Avenue Oriental and Avenue Occidental. The city’s airport is Mariscal Sucre International Airport, located eight kilometres from the centre.

The original Kingdom of Quito was founded in 980 AD by a local tribe which was later conquered by Spanish colonialists in 1534. It became an official city in 1556 as a major administrative district and a key religious centre through the construction of many churches and the San Francisco Convent. Victory during the Battle of Pichincha led to the independence of Quito in the 1800s.